Jackwrench
My name is Alan Washburn, and I am a graphic artist, web designer, and pencil/paper artist looking to get more into digital works. This blog is for sketches and finished work, as well as a place for me to rant and rave as need be.

My Believe in Angles piece ended up taking my bout in Battle Artist 08 Single Battle, so I'm obviously pretty pleased with that.

Not only is Venture Bros basically the shit in animated form, she's awesome, and this is one of the rare times in Battle Artist where the subject fits my specialty.

Totally looking forward to this one.

If you don't know what Venture Brothers is, I weep for you, but you should definitely go check it out if you like sick, twisted humor.

Here's my entry into this week's Battle Artist competition over at DeviantArt.

As usual, you can click here or directly on the picture to be taken to the full version. 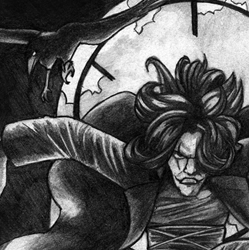 I hadn't seen the Crow since it first came out, and I barely remembered anything about it... had to check it out on Netflix to get reacquainted. It's kinda glorious in how ridiculous it is. I do really wonder if it would be more than a footnote in cinema history if it hadn't been for Brandon Lee's tragic death during the filming.

Anyway, there you have it!

-J
Posted by Jackwrench at 3:07 PM No comments:

Only within about the last year have I made an active effort to get my work seen across more of DeviantArt, making an attempt to take it from a simple hobby to something that might become at least a part-time career. I have a long way to go in terms of skill, I think, before I can be truly competitive in the art world, and I realize that. Especially in the realm of color work, I need a lot of improvement.

One way I have been attempting to get my work seen has been to join various groups in DA. I've found that it makes it much easier to get your work seen because the group already has an established audience and group of fans. When you post to it, your work gets sent to everyone on that group whether they are following your individual profile or not. This gets you exposure, and exposure is important when you're trying to find work (moreso in the industry than many others, I'm finding).

However, something that I occasionally encounter when joining or submitting artwork to groups has popped up again this morning, and it always frustrates me.

"I'm sorry, but our group only accepts finished pieces, not sketches or line art." Sometimes it's preceded by "Your artwork isn't bad, but..."

My work is not sketches. My pieces are black and white pencil drawings, yes, but they are fully shaded, detailed, and cleaned up. They are finished pieces, and frankly, with as much time as I put into some of them, calling them "sketches" is insulting.

If the only issue is that it isn't colored and you want colored artwork in your group, that I can completely understand. I don't expect you to change the rules of your group to accommodate me or my black and white pencil art, but please... don't tell me I'm not allowed into your exclusive club because my work is drawn in pencil and therefor "only a sketch".

New stuff up in my DeviantArt gallery. Head on over and take a look! 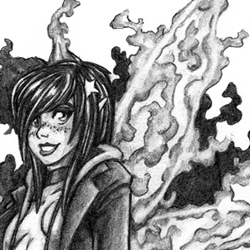 -J
Posted by Jackwrench at 9:33 PM No comments:

So here we are, not even a week after the release of Brink of Battle, and the game is already selling pretty well and picking up popularity. It's getting awesome reviews, and more than a few people have said they believe it'll be the next big thing in the miniatures gaming world.

It's pretty awesome to think about how I'm a part of that... the diagrams, the website, the artwork for the upcoming fantasy supplement... just happy to be on board!

You know you want to.

-J
Posted by Jackwrench at 7:07 PM No comments:

Just uploaded a new piece over at my DeviantArt page. Got hit with the idea for this heading over the pass on the way to Conquest Sacramento last weekend.

You can check out the full version over on my DA page. 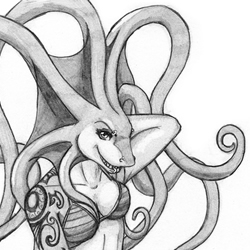 She's part of my Monster Girls series. Thusfar, I've done a displacer beast, a darkmantle, and now, the dreaded Sharktopus (more dreaded because the movie is fucking TERRIBLE, but... yeah. SyFy original.)

-J
Posted by Jackwrench at 9:09 AM No comments:

Conquest Sac and Brink of Battle

Got back from Conquest Sacramento a day late on account of the snow coming over the pass, but we successfully debuted Brink of Battle: Skirmish Gaming Through the Ages at the convention!

It was great... people were getting really into the game, and we had an incredibly high demo-to-purchase ratio. Almost everyone who tried the game bought it, and some of them bought it just after the basic run-down of the rules. Makes me proud to be part of a solid project like this.

Special thanks to the guys at The Launchpad in Lodi, CA for being our official vendor at the con for the book!

Brink of Battle: Skirmish Gaming Through the Ages is available for sale online now through our website. Check out the overview and buy yourself a copy; it's designed to be used with any miniatures you want, so you don't even have to play it with historical stuff if it isn't your bag (it's not really mine either).

-J
Posted by Jackwrench at 8:44 AM No comments:

First, the good news: The project I had been working on will be releasing in just over a week.

Brink of Battle: Skirmish Gaming Through the Ages will be releasing on March 19th (though you can check it out early at Conquest Sacramento if you happen to be in the area next weekend). Together with with the talented Mothbot, I worked on the layout and design of the book, focusing mainly on the diagrams. I also put together the website, army rosters, and a smidgen of other marketing-related graphics for the project.

The game itself is a tabletop miniatures gaming system that focuses on play at the skirmish level (3-20 models). It's extremely unique in its execution and I would genuinely count it among the best (if not the best) miniature games I've ever played.

You can check out some basic information, complete with an overview, over at brinkofbattle.com if you're curious to learn more about it. I'm very excited about it because it's the first thing any of my work has been published in, even though it's technically just the diagrams and some of the graphic work. If it does well, though, there will be another supplement soon to follow that will definitely be featuring more actual artwork, including some of mine.

The bad news, though, is that because of work on the Brink of Battle project, as well as an unexpected twist in my day job, I had to drop out of the Battle Artist competition for this week. Just not gonna have time to finish working on that in addition to everything else on my plate, and while that bums me out, I know I'll jump back into that as soon as I have the chance.

-J
Posted by Jackwrench at 9:08 PM No comments:

It's been a long time for me, so I decided to sign up for this week's Battle Artist competition. It's a group on DeviantArt where you are matched up with another member of the group for each battle and then they assign the entire group a single character or piece of subject matter to produce a piece on, usually with a deadline of around a week.

I love Battle Artist, and used to try and do it as often as possible because it forced me to continuously produce finished pieces (something I always struggle with) that were about things I would normally never draw.

This week is definitely doing to put me in that position again as the subject for the battle is Gaara from Naruto. If you don't know what Naruto is, I'm not sure you're actually a person on the internet who would be reading this blog, but at it's simplest form it's a show about ninjas and whining.

I loath Naruto. I would rather break my own thumbs that sit through more than a few minutes of it, and... I really like my thumbs. Like, I need them to do things. They are important for things.

I can conceptualize why it's popular, but it baffles me as to why the fans are so incredibly rabid. My roommate loves the show, and so do most of his friends, and I just don't get it. It doesn't resonate with me, unless you consider making me want to apply my face forcibly to the nearest load-bearing wall to be a form of resonance.

Even still, I think Gaara is about the only Naruto character I find to be interesting, at least from a design standpoint. I mean, the dude fights by manipulating sand. Controlling it with some ancient art I'm sure they explain in the show at some point, he chafes the ever-loving shit out of his enemies. He took the reason having sex on the beach is way less fun than it sounds and weaponized it.

Like I said, the thing I love about Battle Artist is that it makes you draw things you aren't crazy about. Which is what being an artist, especially one with aspirations of making it a career, has to be able to do; you don't get to work on the projects you want to all the time unless you get to the point where you're a household name. You do the work you get, the work that puts food on the table, and sometimes, that means putting your artistic dick into the metaphorical blender and drawing anything related to Naruto.

... Alright, I'm being just a touch dramatic there. Point is, this sort of thing is good for you as an artist. So... time to get some sand all up in something.

Part of the reason I decided to start this blog is because I actually did some work for a tabletop miniatures game rulebook that has been published but won't be released for another couple of weeks. I'll also be building and maintaining the website for the product, it seems, and I'll be attending at least the debut convention to help promote it.

There'll be more news on that as it develops, but needless to say, I'm excited. The product is outstanding and I'm happy to be part of it, not to mention that getting my work published is a big step in the right direction!

-J
Posted by Jackwrench at 1:23 AM No comments:

Other Stuff to Check Out